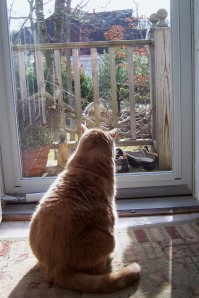 So much for Sunday. It was a good day, while it lasted. Annie enjoyed the sun coming in through the door this morning (I have a new storm/screen door, thanks to D the Amazing Landlord), and I finally got around to cleaning the New Year’s Day sand off my shoes. So what if it took me a week? Annabelle would like to make sure you know that this is not her best angle, and that had she known a picture was being taken, she would have insisted on a re-shoot.

I’ve had that old pain in the jaw again, and the dentist can’t see me and my maladjusted night guard until Thursday. I’m stuck doing the best I can, which involves compresses and ibuprofen and even some of that PM stuff, which just makes me groggy for half the next day even though it helps at night. This is as annoying as it is painful, but at least I know what’s wrong and what to do about it.

I would say that today’s day off was spent recovering, but really, I spent it puttering and knitting and fixing the blog (watercolor on the header — hooray!). I went out to get groceries because the refrigerator looked like nobody lives here, but that’s it. I need days like these. Doesn’t everyone? 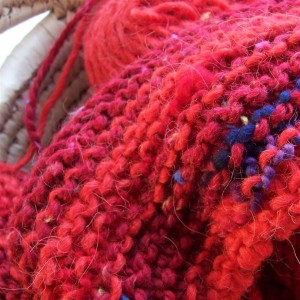 Here’s some of what I knitted today. I was in danger of becoming a complete Red Scarf Failure. I was about to let Norma down. How could it be January 7th already, and time to mail the scarves? What was I going to do? I’d frogged my first one, which was a failure because it wasn’t nearly long enough, but I hadn’t decided what to do about it.

So I pulled together the original yarn and two more from my stash. I cast on what I thought would be about 60 inches of a garter stitch scarf at the start of a three-episode marathon of “Foyle’s War,” a Masterpiece Theater thing I TiVoed for just this sort of situation. Now, at the end of the second episode, I have a 4.5 inch wide scarf. Give me another hour and I’ll be finished. Another half hour after that, and I’ll have it fringed and everything. There. Failure avoided. 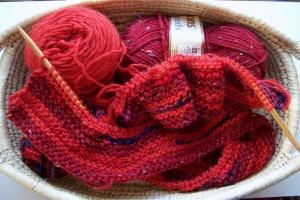 I’ve also been making progress on my two Sundara yarn projects. The sock is still just one, but it’s almost done. I want to knit more socks with yarn that is not so multicolored. The pattern and the yarn get to show off. I like vibrant handpainted yarns, but this quiet Lenten Rose color has my full attention at the moment.

The blue scarf is so easy to pick up and work on for a few rows, and I like the rhythm that develops as I knit the two cable rows. The yarn, of course, is the real pleasure. It slips through my fingers with a soft whisper, and the colors shift so subtly that I keep stopping to watch them play across the angles made by the cables.

Oh, I think I’ll get back to Foyle and the red scarf now. I want to see how they both turn out!

6 thoughts on “Sunday with yarn and cat”