I went on a dig this morning, and I came up with a few things to put in the Stash Lounge at next week’s Knitter’s Review Retreat. 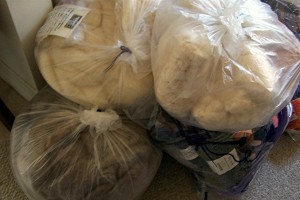 There are two bags of carded wool, a bag of miscellaneous cotton fiber, and a big bag of yarn. I could have continued excavating the closet, but I had had enough after about an hour. A good thing came of it, because I rearranged a few boxes to make things neater. I also found a brand new pair of corduroys that I bought last year and “forgot” about, located my bobbin winder, put the fan away, and added a few things to the stash bins.

Here is one of my discoveries:

It’s my very first skein of handspun yarn! I’m pretty sure it’s Romney, and I’m reasonably sure it was spun in 1978. It’s funny that I no longer remember the exact moment that I learned to spin. I can’t remember where I bought my first wheel, either. The cotton cloth in the picture is one of the first things I wove, in 1977, or thereabouts. I still use it.

Here’s something else that surfaced: 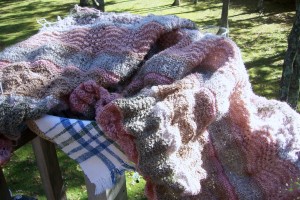 It looks like just a messy pile of knitting, but it’s my oldest UFO. I started this shawl in 1998, as far as I can recall. I was using a formula that my friend Susanne used to make the most beautiful shawls. She assembled all sorts of yarn, kept a stitch dictionary handy, cast on at the back neck, worked paired increases at the center and edges, and off she went. She changed patterns, switched yarns, and just knit. 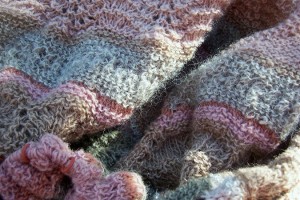 I did the same thing here, with my friend Virginia’s vegetable dyed yarn and some of my handspun. All the yarns could be considered vintage at this point — there are a few rows of the very first yarn V dyed and sold, a nice round singles that she got as mill ends in the late 1970’s, and that took color beautifully. There’s some Gotland, some silk, and some this and that. The dyes were most likely to be madder, marigolds, cutch, walnuts, and water lily roots.

I still have one small box of yarn that V dyed back in the old days, and I think that one day some of it will become a knitted piece. I used to use it to crochet little bags that looked like landscapes, or like garden plots from a bird’s eye view.

I don’t know why I abandoned this piece, except that I think I was running out of ideas. And I wasn’t a good knitter yet, either, because some of the stitch patterns are pretty messy. I might have stopped when there got to be several hundred stitches on the needles, or when I lost sight of the reason I started it, or when life turned upside down.

When I found it today I remembered why I liked it back then. It’s like a knitted landscape.

I’ve been knitting a bit in between some work insanity and preparations for the Retreat (yes, there are preparations such as hemming of pants, packing of yarn and projects and fibers, and laundry, always laundry). The easy-peasy project has been this little scarf that I’m knitting with the Qiviut I got at Rhinebeck.

It’s a simple pattern, a short garter stitch scarf with little double-knit holes to pull the end through. I’ve worked the shaping increases with a yarn-over and continued that all along the straight edge so that this little luxury won’t be all garter stitch. It’s Qiviut, after all, and it deserves a little something extra. Now all I have left to do is finish the decreases on the end, and I’ll be ready for any weather.

I’ve started another project from Clara Parke’s Knitter’s Book of Yarn, but it’s stalled while I wait for yarn in another color to arrive. This is Jennifer Hagan’s Cabled Tea Cozy. It’s the first time I’ve used Malabrigo, and I love the way the cables knit up in the yarn. That Clara — she’s so smart, she knew this would happen. Great stitch definition with a soft singles! Am I the only one who hasn’t knit with this sweet yarn before now? I love it. Love it. I don’t even own a tea pot! Yet.

I’m going to get up out of this chair now and head over to Sag Harbor to knit with Judy and the R’s for a bit. We’re keeping our Rhinebeck momentum going.

Rho and I are packing up and heading to the Seven Hills Inn on Thursday morning, so I’ll be back to report on all the hoopla after the Retreat. This is going to be fun with a capital F!