Just what the doctor (would have) ordered … two days spent spinning and reading and sleeping. When I got home on Saturday afternoon, all I wanted to do was … spin and read and sleep.

I pulled out this pretty roving dyed by Jessie at A Piece of Vermont. It’s her “Real Vermonter” blend of 60% Romney/Corriedale and 40% alpaca, all Vermont-grown. The color is called “Happy,” which is just exactly how it makes me feel. Mister Reeves and I are getting along famously, and I’m back to spinning as well as I’m used to. This big wheel took a little getting used to! 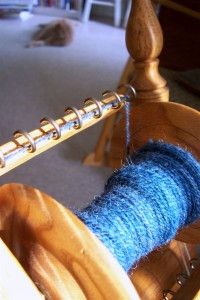 I have four ounces of fiber, and though I didn’t weigh it beforehand, I think I came pretty close to dividing it in half for two bobbins. We’ll see how well I did when I finish plying. It’s a sturdy, soft yarn that I think will make lovely mittens and a hat. These intense blues didn’t photograph well in the late afternoon light, but the finished skein will get a real photo shoot, so you’ll see how pretty it is.

I’ve been deeply engrossed in two wonderful books in these two days. While I was making yarn, I listened to Barbara Kingsolver’s Animal, Vegetable, Miracle. This is one of those books I am in danger of telling everybody they must read, but I’ll resist.

If you love Barbara Kingsolver, and her writing voice, read it. If you are interested in the slow food movement and eating locally, read it. If you’re fond of the people of Appalachia in general and Virginians in particular (my people), read it. If you want to be someone who pays a little more attention to where your food comes from, read it.

It’s not political or radical or preachy. It’s funny and informative and a delight to read. And a huge bonus: Barbara Kingsolver narrates the audio, along with her husband and a daughter. I’m looking forward to spending some time at the Animal, Vegetable, Miracle website, too.

When I needed to lie down, I picked up Khaled Hosseini’s A Thousand Splendid Suns. It seems that everybody has been waiting for this book. They want to know if it’s a sequel to Kite Runner — it isn’t. It’s set in Kabul, so far, in the second half of the 20th Century, and the central characters are women.

I’m only about two hundred pages in, so I don’t know much except that the characters are people I care about, and I’m willing to follow them to the last page. We all know the history surrounding the setting and the time period, so you can assume that this isn’t a light and breezy summer read.

I am impressed by Khaled Hosseini’s writing voice, as it’s so gentle, and things seem to unfold rather than just happen. That’s a difficult feat, considering his story has such a strong historical context.

Links to both books are over on the sidebar under “Books” (natch).

I am hoping that this coming week (a short work week, thanks to the vacation day today) will be calmer and easier to navigate. It will be if I make it so. I want to keep spinning by the open window, and listening to wonderful books. I want to spend some time outdoors, and get some pots of flowers for my tiny little deck. I want to drink iced tea from my tall blue glasses. I want cool nights of sleep and dreams. If I make it so…