The sky was wild, the wind blew directly off the ocean, and I had to spend most of my time facing the dunes. It was either that, or inhale sand. I did get to have a few breathless minutes enjoying the ocean and the sky, and the bigness of the world, before it was time to turn toward home. Welcome, 2008! 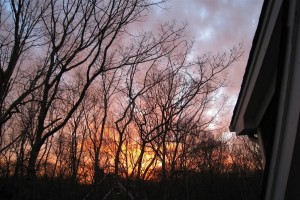 By sunset things had calmed down a bit. 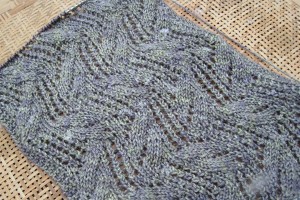 And in between, I began knitting this Japanese Vines scarf. The beautiful yarn can’t be captured on a snowy morning like this one (hooray for snow on a day off!). It’s the yarn that looks like dragonfly wings — String Theory Yarn’s Silk and Merino. I am enjoying this pattern, which I found on Ravelry. We all know how much I love stitches that tilt and tumble!

I had a wonderful first day of the year. There were a few end/beginning of the year things to do at the store, but they took just a few minutes in the morning, before I went to the ocean. I had a bit of a sore throat so I spent the rest of the day at home, quiet and comfortable (I didn’t even turn on the TV until after dark!). By evening I was feeling better, and I’d finished three repeats of the vines pattern.

Everywhere I turn, knitters and friends seem to be making their New Year’s resolutions. I’m more inclined to have intentions. I aim for things, knitting and otherwise. I steer in the direction of what I want. That way I get to meander a bit, and dawdle if I feel like it.

In that spirit, last year I didn’t join up or swap or meme or anything — I just wanted to wander. I learned new things and absorbed new ideas, tested myself, and had many new knitting experiences along the way. For one thing, who knew I would design stuff for other people to knit? And knit a tea cozy? Me? Ca-razy. [Oh! I was given the cutest little teapot for Christmas! I’ll get a picture soon.]

This year, though, two projects caught my eye and my fancy. I’m not crazy enough to try to do something like blog every day, but these two little things, I can handle.

Margene has declared January to be NaSpiMoMo (Ravelry link) — National Spin More Month. Since I do want to spin more, and I’d sort of thought that maybe I might spin more in January, this is right up my alley. There aren’t any rules or guidelines to worry about. It’s a Just Do It sort of thing. I intend to spin in January, on my Reeves wheel especially. Thank you Margene and Carole!

The second project is one I’ll also enjoy. Vicki Knitorious has revived the ABC-Along, which I participated in in 2006. There’s a Ravelry group, and a Flickr group too. I have a new camera that I want to get to know better, anyway. And I’m excited about focusing on photographs again, and spending more time thinking about them.

Our little snow has stopped now (I’ve been fiddling with this post for an hour and a half), but I think I’ll pretend that it’s still falling. Tea (in a pot!) and knitting are on the agenda for today. I hope your day, whatever it holds, is just as cozy.